Antique stoneware was often used in small local potteries in 19th-century New England. They made useful objects in molds and fanciful figurines and vases that could be decorated by hand. Bristol-slip glaze was popular because it was scratch-resistant and added color. One amateur artist made a resting ram to be used as a doorstop. The 9-inch hand-molded animal sold for $144, probably because it was missing part of his horn and an ear. 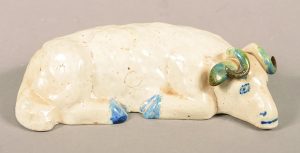 Q: I was left a Lane Cedar Chest that has an aroma tightness feature. The size of the chest is 171⁄2 inches high, 19 inches deep and 44 inches wide. The inside of the chest is in excellent condition, but the outside does have some wear on it. I’m not sure if it’s worth holding on to. Is it worth anything?

A: Lane started in 1912 as the Standard Red Cedar Chest Company in Altavista, Virginia. John Lane was president and his son, Ed, was vice president and general manager. It became The Lane Company in 1922.

The company was known for its cedar chests, which were often used as hope chests by brides-to-be. Lane began making occasional tables in 1951 and expanded to include lines of bedroom, living room, and dining room furniture in the 1960s and ’70s.

You can find the age of your Lane chest by looking for the serial number on the bottom. If you read the number backward, you will find the production date. For example, serial number 753150 indicates the chest was produced on 05/13/57. An extra digit at the end of the serial number is the plant number.

Lane cedar chests made before 1987 have the old-style locks that can latch shut and trap a child inside. Those locks should be removed or replaced. Value de- pends on style and condition. Some Lane chests sell for less than $50, others for over $100.