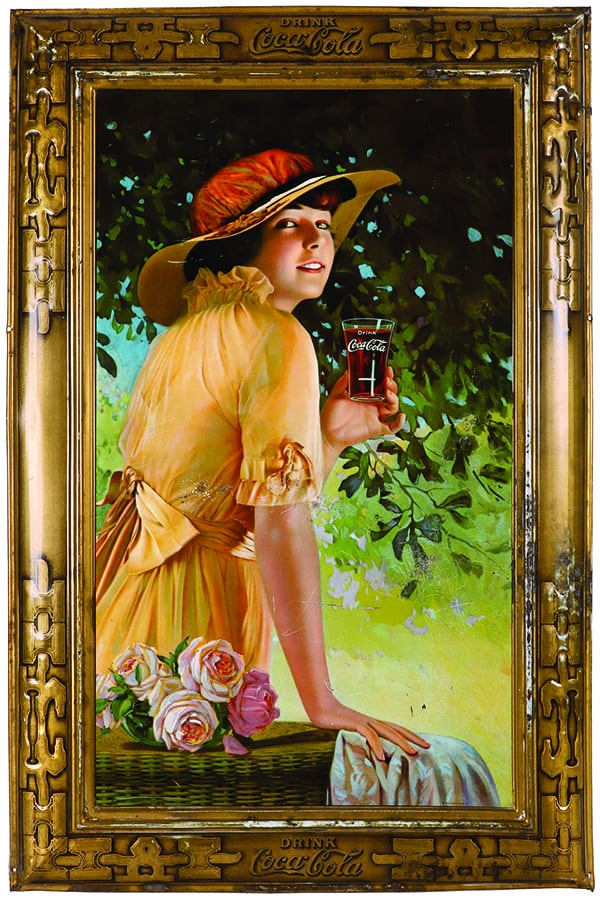 A tin sign picturing an attractive girl has sold for $12,390, which is an impressive price for a portrait of a young woman from the 1910s! If you look closer, you’ll see that the woman is holding a glass marked Coca-Cola, and the Coca-Cola logo is visible on the bottom of the frame. It’s not really a framed painting; it’s a self-framed tin lithographed sign. Collectors of Coca-Cola around the world may recognize her as Elaine, the girl on the company’s 1916 calendar.

Q: I hope you can identify the maker of my great-grandmother’s three-piece set of teapot, sugar, and creamer. She brought it from Europe when she moved to this country about 1899. It is handpainted with pink roses and green leaves and has gilt trim. The pieces are marked Mentone. Some are also marked Th u E, Mr. and Sevres, Bavaria and others are marked Thomas and Bavaria. I don’t know anything about the marks or if this tea set is worth anything. Can you help?

A: Thomas and Paul Ens founded Thomas & Ens Porcelain Factory in Marktredwitz, Bavaria, in 1903. They used Th u E, Mr. (German abbreviation for Thomas and Ens, Marktredwitz) as a mark until about 1908. Ens left the company in 1907. Thomas became an independent subsidiary of Rosenthal AG in 1908. The name Thomas was used in marks beginning in 1908. The word Bavaria without the word

Germany indicates the mark was used no later than 1939. Mentone is the pattern name of a line of dinnerware made by the company, and Sevres is the series name. Porcelain production was moved from Marktredwitz to Speichersdorf in 1960. Thomas is still listed as one of Rosenthal’s brands. Tea sets like this are inexpensive, worth about $50-$100.