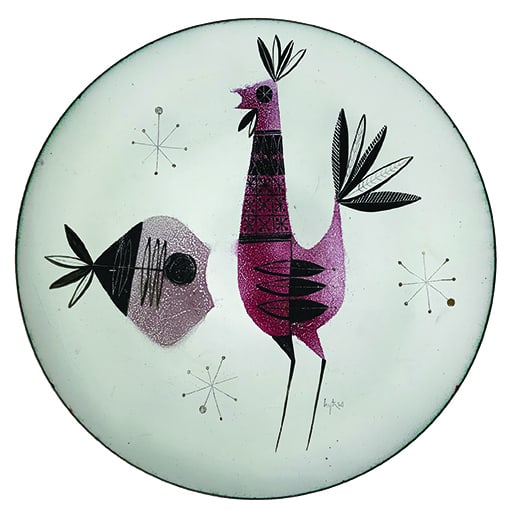 Enamel has been used to decorate metal since medieval times, creating elaborate designs on copper, silver, and other metals. Enameled pieces for home use were rare before the 1800s. Around 1880, a few artists on the East Coast made plaques picturing nature to decorate a metal box or lid for a bowl. These pieces by artists like Gertrude Twitchel sell for thousands of dollars today.

Enameled metal bowls and ashtrays were favored gifts. Modern jewelry, vases, desk sets, and even large wall plaques were made in art schools. Colorful geometric designs, flower forms, and imaginative modern creatures were favored. Artists signed the enamels on the front or back if selling through a shop, but many independent artists left their work unsigned.

An 11-inch-diameter shallow bowl with a stylized picture of a rooster, fish, and three round, thin-line designs on the front was signed Karamu OH Hykes on the back. It was unidentified when first offered for sale, but a Cleveland collector realized it was made by Sterling Vance Hykes (1917-1974), a talented artist who taught at Karamu, a Cleveland settlement house. His work sells for several thousand dollars today. Unidentified, it would probably bring about $400 or so because of the talent it showed.

Q: When I unpacked some Johnson Brothers Old Staffordshire dishes after two years of no use, there was a brownish powder coming from the dinner plates. Are they safe to use? Would they have lead glaze? The plates were in my family from the 1950s.

A: The brownish powder may have come from the packing materials or the cardboard box the dishes were packed in. Some antique porcelain was decorated with lead glaze. If the glaze is cracked or chipped, the lead can leach out. It’s best not to eat acidic food on old china, and do not store food in it. The Food and Drug Administration set regulations on the amount of lead in glazes on ceramic dishes used for food in 1971. The standards have been revised since then. Dishes don’t have to be lead-free, but plates cannot contain more than 3 parts per million of leachable lead. Your dishes were made before those safety standards were set. The only way to determine if the glaze on your dishes has lead in it is to test it. You can buy a home lead testing kit or see if your local health department can test the dishes.