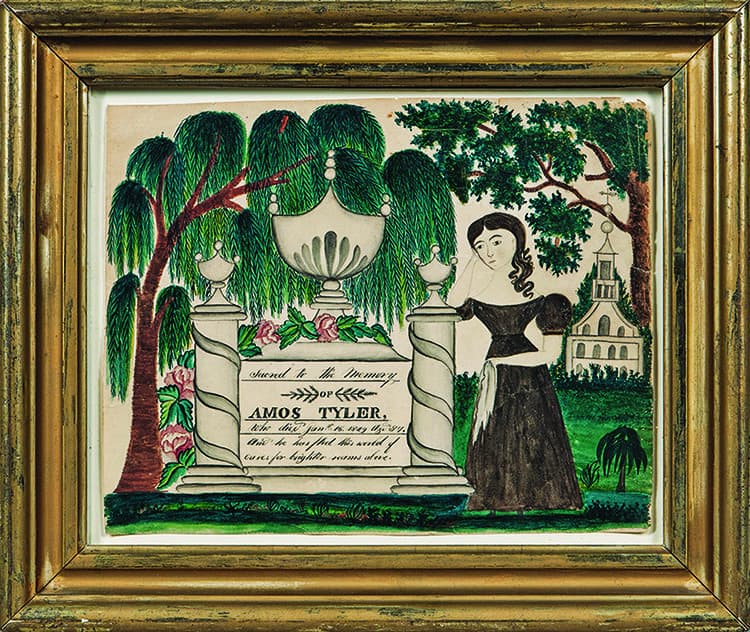 Death was an important part of life in the 19th century. Life expectancy was 38 to 44 years, and many babies died at birth or before they were a year old. Mourning and the rituals that accompanied a death were very important and lasted about a year. There was a funeral, attended by friends and family, often held at home, and burial in a family plot in the yard if there was no nearby cemetery. Black clothing was worn for the year of mourning; even the jewelry was made with black stones. Pictures, in some cases mirrors, were covered, and weekly visits to a religious service to say prayers were expected.

The next few years also included some objects that took time to make, like mourning rings and memorial pictures often created by a close relative. The picture used symbols of death and life after death. A church, tombstones, anchor, lily of the valley, forget-me-nots, urns, weeping willow trees, a coffin, candles, skulls, oak leaves, and of course, angels and the cross were part of the language.

Collectors of folk art search for painted or embroidered mourning pictures that include some of these symbols and information about the deceased, including name, date of death, and location. Many are signed by the artist. This framed picture was sold at a Skin- ner auction. It pictured willows, an urn, a tombstone, black dress, church, flowers, and a weeping relative. The inscription on the tombstone says Amos Tyler. Research found he died in 1829, probably in Massachusetts, at the age of 38. No wonder it sold for $22,140, about 10 times estimate.
***
Q: My mother has an antique table that is in good condition, but the top is warped. Can it be fixed? Is that expensive? Is it smart money to replace it?

A: It depends on what the value of the table would be if it were perfect. A repaired top will lower the retail price by about 20 percent. The cost of the repair is based on the job, not the value of the piece, so the better the table, the more important it is to put it in the best possible shape. It must be a very good repair, and that requires a restorer who is used to working on antiques.