Beware of Criminals Hacking Into Your Computer, Personal Information

As our culture and changing technology make it easier for us to pay bills, transfer or receive money online, this week I want to point out some dangers and advise our residents how to avoid becoming victims of fraud. 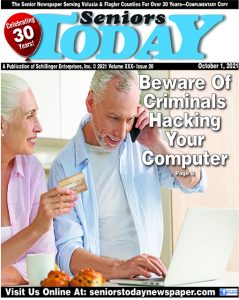 The best way to prevent becoming a crime victim is to educate yourself and stay vigilant because criminals are working harder than ever to trick you out of your money.

Recently, a Volusia County resident re-ported a fraud in which he lost $400. He told our detectives he had been purchasing items on eBay, a popular electronic commerce website in which users list their items for sale. When he needed help from eBay customer service, he was directed to call two other phone numbers.

There he was told to download an iPhone application called Anydesk. This is a remote desktop application that allows independent remote access to computers. It can leave victims vulnerable to having their identity information stolen.

This resident was instructed to send two payments totaling $400, which unfortunately he did, using a cash app. For now, his bank is launching a fraud investigation.
In another recent case, the owner of a painting company contacted the Sheriff’s Office after a “customer” hired him to paint his house. The suspect sent our victim a check and it was deposited. Then the suspect advised he needed the money back. The victim returned the money, using a cash app. Then the check bounced and the victim lost more than $3,000.

Sadly, fraud cases like this occur every week in our county, to people of all ages. These crimes may involve a bad guy hacking into a victim’s bank account/credit cards and helping himself, or impostors using a myriad of elaborate schemes to swindle victims out of their money.

Tips: Here are some important tips from her website (www.myfloridalegal.com) to help you avoid mobile malware attacks:

Red Flags: Here are signs that mobile malware is already on a cell phone:

The Florida Attorney General’s website offers important information about this topic and resources to help you recognize, remove, and avoid malware.
Of course, if you believe you’re a victim of fraud, call our non-emergency number at 386.248.1777.