by George Goldtrap
Chicagoan Harry C. Meek is sometimes credited with starting Father’s Day in 1920, but history shows the special day actually predates Mr. Meek by almost 10 years. The creation of this national event actually began with a grateful daughter seeking a unique way to honor her father—William Smart, a Civil War veteran, widower, and father of six children. The result? On June 19, 1910, Father’s Day was born. In 1924 President Calvin Coolidge supported the idea of making it a national holiday, and in 1966 President Lyndon Johnson made the 3rd Sunday of June the official day. Like any such celebration, tradition and commercialization soon became a factor. 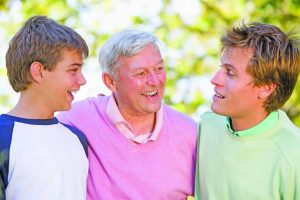 If your father is living it is traditional to wear a red rose—just ask the Floral Association. Department stores recommend a nice tie, whereas the Bar-B-Q Fellowship recommends a cook-out where Dad does the cooking. Whatever your preferred activities, its not a bad idea to reflect on your father’s contribution to your life. If you are a father, it might make you more aware of your own responsibilities and opportunities. Whether you are the father, or the child, the day might best be honored with a hug and an expression of love and ap­preciation. These are available most anywhere.

In my own case, I’m very fortunate. Not only did I have a loving father. I became one. The laws of nature gave Peg and me three sons. When it be-came obvious that a daughter was not to be, we sought one out and she became a delightful addition to our family. (I’m reminded of a famous Walter Winchell quote: “One of my children is adopted but I can never remember which one.”)

As a father I couldn’t be prouder of my children. Each has chosen a life path with which they are comfortable and challenged. Each has found a mate who shares their values and goals. Each is a contributor to their community and each occasionally returns to the nest to remind me that life is good. If you are a parent you’ll forgive my pride. If you don’t—that’s tough!

My own father has been gone many years. Gone, but not forgotten. I’m not the type who visits gravesites, though I certainly understand the sentiment of those who do. I don’t need that to conjure up delightful memories. They are forever burned in my heart.

My birth was preceded by that of six girls, one of whom did not live long. My father al­ways said he was a wealthy man. He had five daughters each worth a million dollars. When I was born, 10 years after the last girl and 50 years into my father’s life, he said that, with the addition of a $5 million dollar son, he was now worth $10 million. Mother, at 39 wasn’t quite as thrilled but agreed with Dad that Caboose would be a good and proper name for me.

I was off to a good start. Both my parents worked but I never felt any ill consequences. Togetherness did not have to be manufactured in our house. It was the rule. Breakfast every morning, supper every evening, a movie every Friday, backyard ball games followed by ice cream every Saturday, Sunday school and church every Sunday, and a pro-ball game summer Sunday afternoons.

In the summertime it was working with Dad through the week, fishing, trips to the circus, and a family vacation to the Smokies, or the Rockies. In the fall to the east Tennessee hills to visit relatives. We were not wealthy, but leftover money was saved and then directed to some worthwhile family event. As I grew older I trailed along behind Dad on business calls, civic club meetings, and church events without an inkling of the importance of such time. Forty years later with offspring of my own, the light came on.

Having spent so many years on stage in one entertainment venue or another, I’ve been exposed to a lot of grand op-portunities, in various parts of the nation and globe. I treasure them all, but second to the opportunity to hold a newborn family member in my arms and to kiss my wife thank you. Or, to walk down the aisle with my daughter, dressed as a bride and experience her eventual motherhood, and grand-motherhood.

Yes, I confess to having lived a charmed life with a delightful family, both as a child, as a husband, and as a father. I fully recognize that not everyone is that fortunate. If I could correct that I would. I cannot celebrate Father’s Day for everyone in the world, but I can celebrate it for myself, and I fully in­tend to—with pride!

Have I shown you the pictures of my grandchildren?