For The Love Of His Children…

Twenty years ago, the school system hierarchy began talking of cutting back on the arts in school.
One Sunday, I walked into church and saw a quiet lady sitting at the grand piano awaiting time for the services to begin. We introduced ourselves and I had a short conversation with Leigh Slayback, the very pleasant Choir Director. 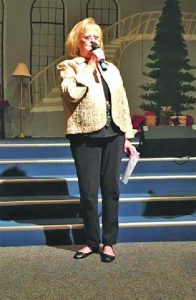 I came to know her well—as a person of many talents and unlimited energy. I learned that, in addition to her work for the choir, she was making plans for the children of the church and community. It soon came to be that Leigh founded CAFA (Children’s Academy of Fine Arts).
What a successful venture! There have been so many talented people that Leigh knew, or came to know, who joined her in working with children from Pre-K through High School. Their enthusiasm knew no bounds.

One of the early, most notable events for the CAFA children was when Leigh took the entire Ac- ademy, costumed in identical red shirts, to sing at Disney World! They were a big hit!
In February 2010, Channel 6 News featured Children’s Academy of Fine Arts, Inc. in their Making A Difference segment. CAFA was featured because of their contribution to young people.

At times, CAFA has had well over 100 students participating in learning piano, violin, guitar, harp, singing, and drama. Area teachers noted that students walked away with confidence and the ability to smile and carry on conversation as never before.

In a special project of this kind, it was a wonderful experience for retirees to become involved. CAFA costumes were made by a creative retired seamstress. Men and women retirees passed muster as approved bus drivers, bringing the children from school to rehearsals, etc.; others gathered to build backdrops as the beautiful scenery was being prepared by a talented Disney retiree.

Through the years, Leigh worked toward producing two or three shows each season… shows like Titanic. What an undertaking that was on the 100th anniversary of the sinking of the Titanic… but the show was so worth it!

Some of the other well known shows produced through the years were: Beauty And The Beast, Annie, The Sound Of Mu- sic, Pirates Of Penzance, and so many more.

When Leigh learned of her retirement, she didn’t say anything right away. Friends finally learned she was leaving as Choir Director and it seemed timely to honor this lady who had done such a worthwhile service with the choir and with the youth of our area.
Many wondered if there was a plan for CAFA to continue and learned that Summer Camp would be held at Stetson University. The location had been changed and a new production was on the way!

The Children’s Academy Of Fine Arts will be presenting their final show of the season, Peter Pan, May 25th at 7 p.m., in the park at the lovely outdoor setting of Venetian Bay!