How To Start A Ford Tractor

by George Goldtrap
For two years I did TV did commercials for Western Kentucky Tractor Company. The company was started by a local businessman who took his small upstart to number one Ford tractor dealerships in America.

We started with a 30 minute segment of a local Saturday night Country Music show, the station’s premier money maker. As success grew they extended to one hour. Ford tractors sold almost faster than they could be delivered. For me the talent fees rolled in. 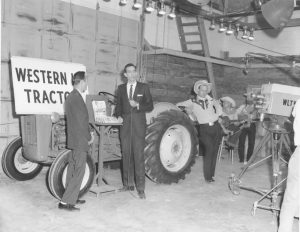 The commercials were never written word for word. Using suggested story lines, always live and ad-lib, I plowed on. On air I interviewed dealership department heads, the sales manager, the shop boss… as they testified to the great deals and service at Western Kentucky Tractor. I did the commercials standing beside a tractor in the studio, or with a model tractor supplied by Ford. The pitch was suggested by Ford, but the execution was all mine… a challenge and great fun.

On one show, the sponsor put me on a tractor to point out the features of the latest model. We rehearsed until it was just right. At the end of the commercial I was to start the tractor and drive it out the door into the night… the ultimate fade to black. We took the rehearsals right up to that point without actually driving the tractor out the door, assuming that would be the easy part. WRONG!

We had a packed house and a great talent line-up. This commercial would be the first of the evening, then we could get the tractor out of the way. One of the premiere acts of the night had kicked us off with a great performance. The audience applauded wildly. I was in position on the tractor seat and raring to go.

I introduced the tractor and reviewed its features. I finished the pitch, turned to the steering wheel and turned the key, intending to drive the tractor out the already rising studio door… my grand finale.

I turned the key, activating the starter. Grarrrrrr Grrrrrrrr Garrrrrrr.
Nothing. I laughed, thinking I had just not tried long enough. I hit it again… GGrraaa arrrr Garrrrrarrr. Still nothing. Now I’m feeling the heat. The director… and the sponsor are wondering what’s happening. Remember we are live.

I gave up. The tractor was not going to start. I laughed about it, and recommended the audience visit the dealership and start one of their own. The audience realized my plight and respectfully laughed and applauded at the same time.

The Ford brass met me in the backstage area. To my great shagrin and relief they were all laughing. The dealership owner, a grand man, was laughing the hardest. Ex- tending his hand and patting my back simultaneously, he said… “Great job George”… I breathed easy and said, “Thanks but I sure didn’t like the way it ended.”
“George,” said the boss man…“you were not raised on a farm were you?”

“Nope,” I responded “and I feel certain you are going to tell me how that makes a difference.”

“Yes sir I am,” he chuckled. “A tractor won’t start unless you have the clutch engaged… it’s a safety mechanism.”
Immediately I knew what the next commercial would be… I would expose my ignorance and win back the audience. The tractor was still in the middle of the stage. I eased back onto the set. On cue I said, “Well folks, even a city boy can learn to start a great Ford tractor.”

Grrarrrrrrrinnnnngaroom! Putt… putt… putt… the motor sang like a bluebird. I turned to the audience… tossed a kiss… and drove the big blue Ford right out into the darkness. I could hear the laughter and applause as the door came down.

I have never started a tractor since, but I’d have to say putt, putt, putt is a pretty sound—even to a city boy.