Keeping Up With History

It is amazing how much information is just at our finger tips. I love learning more about how the United States came to be.
Our first president of the United States (after the Constitution was written and approved) was George Washington. Yes, we all knew that but did you know that prior to the writing of the Constitution, our original president was John Hanson, who presided over Congress beginning in 1721. He was the first of eight Presidents as our country was being formulated. Under the Articles Of Confederation, the United States had no executive branch.

President Hanson’s work was signing official documents and dealing with correspondence. Though he didn’t particularly like his job, he remained. The Articles of Confederation hadn’t accounted for how to handle succession so he remained because of his sense of duty and his love of country.

Often regarded as the “forgotten first President,” from November 5, 1781 until November 3, 1782, President Hanson was able to remove all foreign troops and their flags from American lands. The Western Territories, beyond the Appalachian Mountains, had been controlled by some of the original thirteen colonies. As President, he led to their guarantee of statehood.
President Hanson was responsible for the introduction of the Treasury Department, the Secretary of War, and the first Foreign Affairs Department.

During his time of service, President Hanson saw to it that Thanksgiving Day was established and would be the fourth Thursday of November.

Research turned up the information that Hanson is regarded as the “forgotten first President.” In Seymour Weyss Smith’s biography of John Hanson, Our First President, he says that the American Revolution had two primary leaders: George

Washington in the military sphere, and John Hanson in politics.
Although one position was ceremonial, and the other was more official, there are statues of both men in the United States Capitol in Washington D.C.

From the book by Jacob A. Nelson, John Hanson And The Inseparable Union, published in 1939: “Thus was ended the career of one of America’s greatest statesmen. While hitherto practically unknown to our people, and this is true as to nearly all the generations that have lived since his day, his great handiwork, the nation which he helped to establish, remains as a fitting tribute to his memory. It is doubtful if there has ever lived on this side of the Atlantic, a nobler character or shrewder statesman. One would search in vain to find a more powerful personage, or a more aggressive leader, in the annals of American history. It is extremely doubtful if there has ever lived in an age since the advent of civilization, a man with a keener grasp of, or a deeper insight into, such democratic ideals as are essential to the promotion of personal liberty and the extension of human happiness.”

Until a few years ago, I would not have believed the history that has been left with us before and during my years. I am de-lighted to have access to a computer for I sought and got the information in this article as well and the eight presidents that preceded our George Washington. 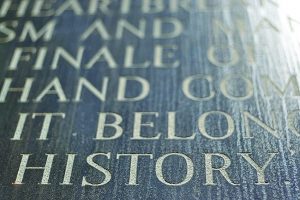 Things change every day and it is fascinating, looking back and learning how we came to be—as well as moving forward!
Kitty Maiden is a staff writer for Seniors Today.