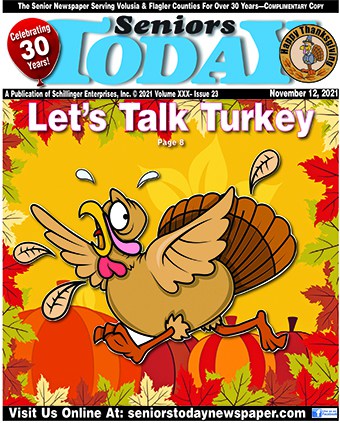 • Turkeys first existed in the eastern U.S. and Mexico, where Aztec Indians were raising them for food as early as 200 B.C.

• The Native American name for turkey is Firkee.

• Wild turkeys can fly for short distances up to 55 mph and can run 20 mph. The modern large-breasted turkey bred for the Thanksgiving table is too heavy to fly under most circumstances.

• The average weight of a turkey purchased at Thanksgiving is 15 pounds and is about 70 percent white meat and 30 percent dark meat. The heaviest turkey ever raised weighed 86 pounds, about the size of a large dog.

• The turkey trot, a ballroom dance popular in the early 1900s, was named for the short, jerky steps that turkeys take.

• In England, 200 years ago, turkeys were walked to market in herds. They wore booties to protect their feet.
• Age is a determining factor in taste. Old, large Toms (males) are preferable to young Toms, as their meat is stringy. The opposite is true for fe-males: Old hens are the tougher birds.

• A turkey under 16 weeks of age is
called a fryer—a young roaster is five to seven months old.

• Only Tom turkeys gobble, mostly as a mating call.

• Turkeys can see in color, but do not see well at night.

• Wild turkeys often spend the night in trees. They especially like oak trees.

• Turkeys are actually a type of pheasant and are the only breed of poultry that is native to the Western Hemisphere.

• Henry VIII was the first English king to enjoy turkey, and Edward VII made turkey eating fashionable at Christmas.