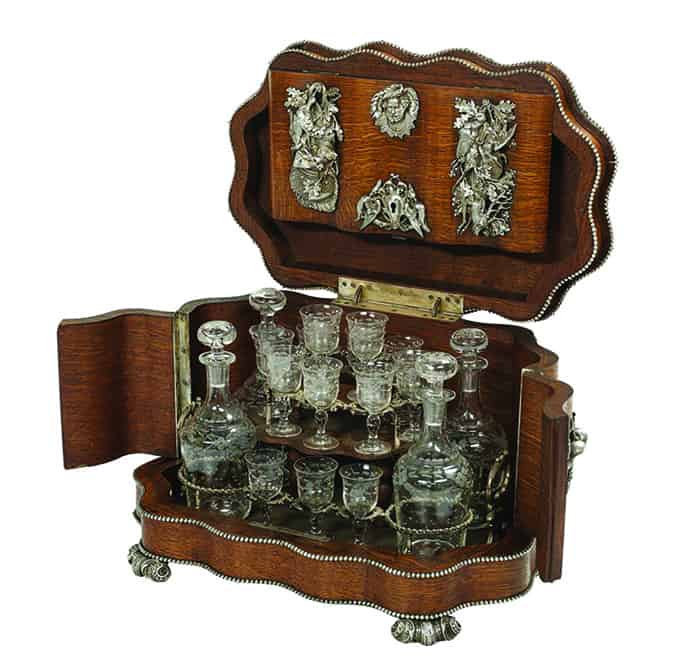 By Terry and Kim Kovel

Antiques are given many names, often changed to be written in a new language or used in a different way, and there can be confusion. Is a cave a liqueur the same as a tantalus? Both have decanter bottles; both have drinking glasses; both can have locks; and both are used to serve liquor to guests, one usually before dinner, the other during and after a meal. In the past, formal service of alcoholic drinks, especially at banquets and special-occasion dinners, was important. The tantalus bottles held liquor, a distilled alcoholic drink like scotch. It should be easy to remember that a cave a liqueur held—what you would expect— liqueur, an after-dinner fermented sweet drink like brandy, flavored with fruit or spices. The names sound alike but are spelled a bit differently.

The two containers and contents follow formal rules of design. The tantalus has decanters in an open rack with tops that are locked, opening only with a key.

The tantalus was named for Greek King Tantalus, who was condemned to stand in a pool of water in Hell and never be able to get a drink. The cave a liqueur holds small decanters and glasses suitable for the small after-dinner drink. Both of the serving boxes were large, often made of wood with added brass or other metal decorations and gold-painted accents. They were very much in style from 1850 to 1900. The 11-inch-high box pictured holds four decanters and 16 liqueur glasses.

There are many jokes about the locked liquor supply, but it seems possible that the locks were meant to keep the household help from taking drinks and leaving empty decanters or adding water or other liquid.