by Jason Goldtrap
In 1990, my parents were living in a condo in Madison, Tennessee, a suburb of Nashville. Family connection has always been strong among my brothers and sister. We cherish our moments together, so we always gather for holidays.

My mother enjoys holiday decorating and that year she’d gone all out with little eggs, spring flowers, and white, wicker baskets lined with faux, plastic grass.
Two years before, our family had been adopted by a kitten who showed up on the porch one day and claimed us as her own. We called her Ragdoll, a big, fluffy, affectionate but definitely independent feline. 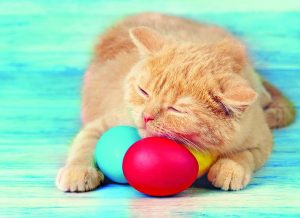 Ragdoll would come by the condo for petting, canned cat food, and a catnap in a warm sunbeam. In return for this adoption, Ragdoll occationally left a dead bird on our porch, a domestic predator’s way of saying, “I love you too.”
In the days leading up to Easter Sunday, my mother added the last piece of décor on the entryway wall—cartoonish, brown bunnies.

Ragdoll arrived for her lunch and nap reservation, announcing herself with a meow, and walked into the condo, but, a few feet inside she stopped, something caught her attention. She closely examined the new addition—as if it seemed familiar.

She tilted her head, looked at us, another glance, as if to say, “yup, yup, I got it.”
Easter Sunday the condo was buzzing with activity. Two grand-daughters were running around in their yellow and bright pink dresses. My two older brothers and sister with their spouses were loading the bountiful feast on the glass table in the dining room. I was filling up on those little chocolate eggs from Walgreens that magically appear on the first day of March.
The dinner bell chimed and we quickly charged to the delicious, juicy ham whose succulent aroma enticed us to the feast.

Following an appeal to heaven from my father, we dove into the mashed potatoes, corn casserole, cauliflower, green beans, and homemade yeast rolls with brown sugar and butter. Yum…!

As the second pitcher of ice tea made its round, 4 year old Carolyn decided to stretch her legs and amble over to the glass door overlooking the back porch. Ragdoll must have been watching through the slats in the fence, awaiting the perfect time to make her entrance—the moment arrived and she bounded over the fence.
Our ears ached from a deafening scream, “Ragdoll killed the Easter Bunny… Ragdoll killed the Easter Bunny!”

Carolyn disapprovingly shook her hands, shrieking in horror for the celebratory Peter Cotton-carnage of the wee woodland creature.
Ragdoll seemed quite proud of her trophy, animating how she saw it hopping down the bunny trail and then happily pounced.

As the two mothers tried to consoled their victimized toddlers, my mother stepped on the porch and demanded Ragdoll finish her meal away from our view. Confused, but obedient to her provider of Starkist Tuna, she took it by the jugular and leapt over the fence for the other neighborhood.

Egg hunting that April day was a rather muted affair. The girls were uneasy, hoping that the little egg shaped, purple thing they picked up in the flower bed was a plastic container hiding bubble gum and not the disembodied head of a starling.

Fortunately, the rest of the day went off perfectly and we were left with a grand family legend. As someone once said, nature can be hilariously cruel.