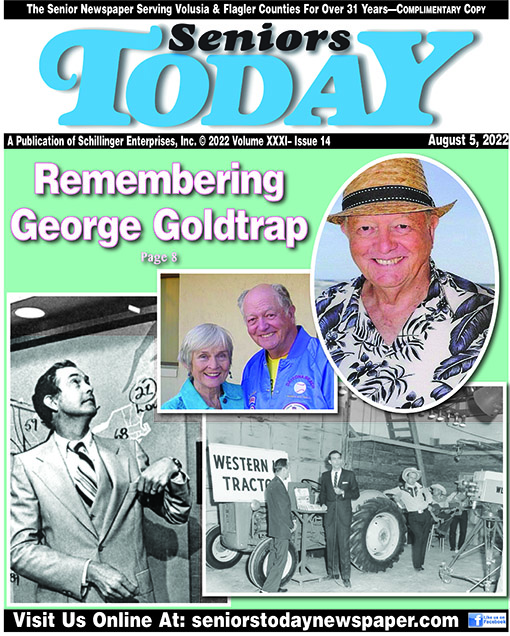 On June 29 Seniors Today and the world lost a great columnist, humorist, and friend. I was sad to learn that George Goldtrap, one of our long-time partners /writers with Seniors Today, had died at the golden age of 85 after a brief hospital stay. George was a former actor, weatherman, and preacher. To those who were the closest to him he was the most loving and loyal husband, father, grandfather, great– grandfather, and friend!

George contributed columns to Seniors Today for over 20 years! Later his wife Peggy (Peg to him) would join him and they would collaborate to bring us great words of wisdom, advice, and yes, always humor. He always had the best outlook… the glass was always half full! His column was even titled Happy Talk… and that it was!

Even though most of our communication was through e-mail, I still felt like we were family. Through his columns we always had a peek inside his family and what he was doing. We celebrated many marriages, births of grandchildren, and later greats. He and Peggy took us all over the country with their travels and gave us some wonderful tips on fun to enjoy on the local scene. We learned even into his 70s George was still playing baseball with the local senior league! We also shared some sad times with deaths of friends, and illnesses with him and Peg in later years.

When his wife Peg told me last week that George had passed, she explained there would be no services because George’s final wishes were to donate his body to science at the University Of Florida. She said, “George loved to tell everyone that he was going to medical school when he died.” Yes… that’s George Goldtrap, even as he left this world he put a smile on my face, and hopefully on yours as well!

My Dad
“I have a million dollar view,” my father George Goldtrap, Jr. would say as he’d gazed upon the crashing waves and shimmering waters of the Atlantic Ocean from his condo in Ormond By The Sea.

On Wednesday, June 29th, his 85 year old body said, “that’ll do,” and he took an eternal nap.
Four days in the hospital. Four days!
God is so good.

He had 5 sisters die of Alzheimer’s. They spent years confused, depressed, and unable to recognize their own children. My Padre beat the odds!

He died full of years. No regrets. No “if only I had…” Everyone whom he loved knew it.
On Tuesday, June 28, I created a video of him welcoming a new daughter-in-law to the family.
He said, “You don’t know how good it does my heart to see your family expanded. Agreeable. Getting along and having a bright future. Everybody owns a home and has a good job. I couldn’t be happier. I could die in thirty minutes and be very happy. Okay, let’s go. Let’s quit.”

As I write this even though my eyes are filled with tears my face wears a smile. I miss him so much.

Dezerland Action Park in Orlando has an impressive collection of classic cars. We had talked about going there for months but his old bones weren’t up for the one hour and fifteen minute car ride.

Everyday, I would share pictures of Studebakers, Nash Ramblers, and 55 Chevys on Facebook. I would call him and he would share with me their history and often humorous stories about the ones he owned.

I could go there now… but without the amusing tales, I would be looking at hunks of steel, chrome, and glass. The meaning would be gone. I would walk out alone and shrug, “That was okay, I guess.”

There is an old expression, “You don’t know what you’ve got until it’s gone.” That is not true in my case.
For 54 years, every visit concluded with a hug. Every phone call, “I love you Dad.” I always took home a funny story to share.
Now, the storybook has closed. That’s okay. I have read the words, “The End.” He read, “And they all lived happily ever after.”

“Seniors Today” extends their deepest sympathy to the Goldtrap family.