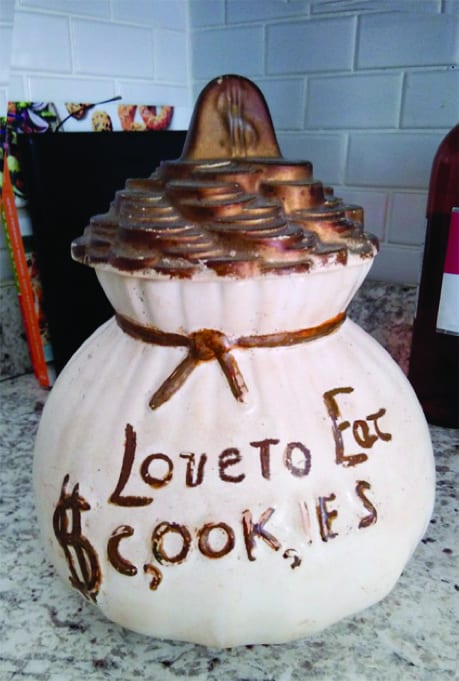 This cookie jar was given to me as a birthday gift when I was a little girl. As I grew older, instead of putting Oreos and Little Debbie Oatmeal Cream Pies in it, I developed the calorie-free habit of tossing all my loose change into the cookie jar.
Every time I cleaned my purse, there were gobs of change on the bottom. I’d toss all of it in the cookie jar. When the change in my wallet was too heavy, I’d dump that in there, too. All the coins from the washer and from between the seat cushions made their way to the cookie jar.

The cookie jar came with me wherever I moved and whenever it was full, I’d wrap up the change and take it to the bank.
Then the kids came along. When they were little, I’d dump all the change out onto the kitchen table. It made quite a racket and they’d come running to help me wrap. After one or two rolls, they’d get bored and run off and I’d be left there…. alone. There was something soothing about wrapping roll after roll of change (while the tv and stereo were blaring, and they were arguing over the remote, and the guy across the street was cutting his grass for the 4th time in a week.) I was perfectly peaceful wrapping rolls of pennies in my own little world.

My cookie jar came in handy a couple of times over the years. Once in a while I’d be cash compromised and one of the kids would invariably need money for something, at the last minute. Like when one of them said on a Friday morning at 6:45 a.m., “Mom, I need money in my lunch account.” I opened my wallet and realized I didn’t stop at the bank the night before. So, I reached into the cookie jar, pulled out a handful of quarters and threw them in a sandwich bag.

Through the years I kept sporadic track of how much money went into that jar. I’ve saved hundreds of dollars this way, but it’s probably more in the range of a few thousand.

Now, instead of rolling it, I take it to my bank. I put it through their counting machine, which is a free service. I love seeing those numbers add up as the coins rattle and roll their way through. It’s like winning at a slot machine!

Even though I’m older and the kids have moved on with their lives, I’m still popping my change into that good old cookie jar on the kitchen counter. Most of the shiny gold paint has worn off, and it’s got a couple of chips and dings (like me), but it has a lot of character and fond memories attached to it.

I’ll pass it on to the kids when I pass on… lol.