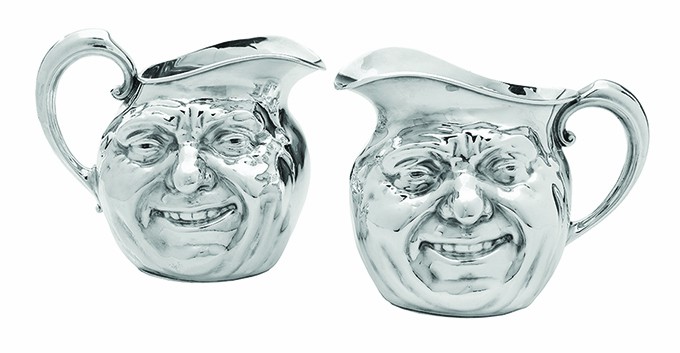 Silver-plated pitchers were made by Reed & Barton, a company founded in Taunton, Massachusetts, in 1822. The pitchers look like the double-faced stoneware pitchers made by the Martin Brothers in England between 1875 and 1915. Similar pitchers were also made by Royal Doulton.

The silver examples are known as Sunny Jim. The ones pictured are about 6 1⁄4 inches high, and each holds about 56 ounces (7 cups) of liquid. Many figural pitchers, steins, and mugs had names that were used in advertising brochures. The silver pitchers were pictured in magazine ads in the 1920s and 30s. They were discontinued in the 1950s, but may have been made until the 1980s.

Three slightly different versions were made with different rims. These are probably the first two types of the pitchers. The third variant, which was probably at the end of the production, has a handle with a higher curve that was attached to the rim only at the outermost area of the scroll.

Q: I inherited a lot of piano sheet music when my mother passed away, much of it from the World War II era. Titles include Bell Bottom Trousers, March Of The Free, Wings Of Victory, and I Am An American. Is anyone interested in collecting these?

A: Some old sheet music is collectible, but most sell online, in flea markets, an-tiques shops, and house sales for a few dollars. Subject, cover art, rarity, and condition will help determine the price. Some collectors look for music on a particular subject, but many collectors buy sheet music for the cover art. Covers with artistic illustrations or pictures of historical events, old cars or trains, or political events increase the value. Someone who is interested in patriotic music from the World War II era might be interested in your music. It’s hard to sell the music yourself unless you’re used to selling online. You might try a consignment shop in your area.

TIP: The less you handle an antique or collectible the better. Always pick it up with two hands.