Peg and I often laugh that the best way to get rid of useless things is to save them in a stack on top of the desk. Once the stack gets—out of control, high—we sort the things no longer used or needed and separate them from the things that are useful or needed. I must confess however that I sometimes put them in a separate stack and save them—out of site—behind the office door. Please don’t tell Peg. 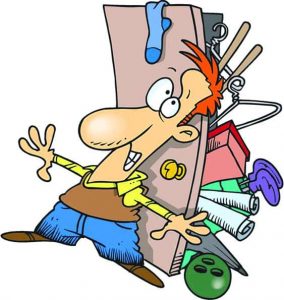 I mean, you never know—tomorrow they may be useful. Additionally, when they are in the stack behind the door, at least I know where they are.

It’s the same way with clothes. Peg says if you have not worn it for a year, you don’t need to keep it. Maybe I like that tie—maybe one of my boys would like to have it, or maybe a friend —besides ties make good kite tales. She insists, “It has to go.” She needs the space to put some new used things she bought at the Goodwill store. I get the feeling we are on a ‘things’ merry-go-round. Reminds me of what George Carling used to ask, “Why is my stuff junk and other people’s junk is stuff?”

Don’t get me wrong. I do believe in trash. Every day when I make the trek to the garbage dumpster, I ask myself, “How can two people generate so much trash?” Again I confess, sometimes I go thru the garbage to make sure there isn’t something of value hidden at the bottom. Maybe we should keep that top off of the broken mustard jar just in case we lose one in the future. It has happened.

My solution to this predicament is to put the tossed items in a file box and store them in the bottom of the bedroom closet… but I can’t. The space is already full. I mean you can’t just toss a very comfortable pair of old shoes—besides they’re an unusual shade of brown and I’ve been looking for a suit that same color.

Years back, I had a brother-n-law who saved everything. To be fair, he was a good man and he often gave away various items to someone who needed them… but he had to build a garage just to have a place to store the give-a-ways. He loved to attend garage sales and loved to buy old tools. He stored them in a drawer packed with screwdrivers, pliers, and thing-a-ma-jigs. We often joked that he never saw a screwdriver he didn’t like.

All this reminds me, I saw something yesterday that needed to be repaired and I knew I had just the thing needed to do the job. I lost half a day looking for it. It’s probably in a box in the bottom of the bedroom closet. I’ve got to label those boxes one of these days. Oh! I remember now where it is. I threw it out last week.

Well, you know I could go on and on but Peg is rushing me to get going. I’m going to buy some boxes and she wants me to drop her off at the Goodwill store… and I will if I can find my car keys.