Special to Seniors Today
Valentines Day has many stories of when and where it began. Most know the story of St. Valentine whose claim to fame is for supposedly marrying lovers in secret. 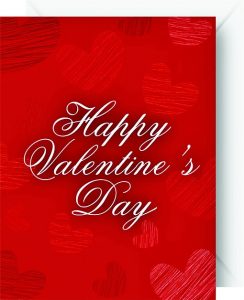 Then there is medieval English poet Geoffrey Chaucer who often took liberties with history, placing his poetic characters into fictitious historical contexts that he represented as real.

No record exists of romantic celebrations on Valentine’s Day prior to a poem Chaucer wrote around 1375. In his work Parliament of Foules, he links a tradition of courtly love with the celebration of St. Valentine’s feast day–an association that did not exist until after his poem received widespread attention. The poem refers to February 14 as the day birds (and humans) come together to find a mate. When Chaucer wrote,

“For this was sent on Seynt Valentyne’s day / Whan every foul cometh there to choose his mate,” he may have invented the holiday we know today.

With an abundance of St. Valentines on the Roman Catholic roster, you can choose to celebrate the saint multiple times each year. Besides February 14, you might decide to celebrate St. Valentine of Viterbo on November 3. Or maybe you want to get a jump on the traditional Valentine celebration by Feting St. Valentine of Raetia on January 7. Women might choose to honor the only female St. Valentine (Valentina), a virgin martyred in Palestine on July 25, A.D. 308. The Eastern Orthodox Church officially celebrates St. Val-entine twice, once as an elder of the church on July 6 and once as a martyr on July 30.

Legend has it that King Henry VIII —the one who famously had six wives —declared the first Valentine’s Day in 1537. Ever since, it’s been an occasion to show the one you love how much you care with cards, sweets, gifts, and flowers.

However it began, or who started it—Happy Valentines Day!