Imagine being married before you learned to drive. That’s going way back! Imagine having to prove your identity to the government in order to pass through the gates to a town in America—just to visit your family. Imagine being intercepted by the police while driving around the town seeking to find where the family lived. Imagine passing such things as old fashioned outhouses on the way to the Atomic City.

There is a book out by author Denise Kiernan, called Girls Of The Atomic City. It is all about when most women went to work for the first time, rushing to Oak Ridge to help our country’s effort.

Just hearing about it was a reminder of times past, when my own family moved to Oak Ridge (why, I am not sure). Dad had been working at the shell loading plant during WWII and was a blackout warrant officer in times of possible crises in Virginia. He was not drafted because he had four children.

After the war, he and the family moved to Oak Ridge, the Atomic City. There, my sister and older brother were among the first students in the multi-million dollar Oak Ridge High School. They and our younger brother, who attended grade school in a wooded area (pre-atom bomb days building) graduated from Oak Ridge High. 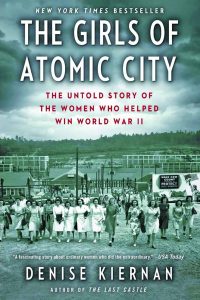 The town was filled with quickly built asbestos houses and many brick apartment buildings, referred to as row houses. We located our family in one of the brick apartments. We learned right away that it was quite possible that a clerk at a grocery store lived in an apartment next door to a government employee, perhaps a scientist. One thing for sure, you never knew what your neighbors did for a living because it was mandatory that your job was never discussed with anyone.

In Oak Ridge, there was zero percent unemployment. If you found yourself without a job, you left town immediately.
O.T., the man who graduated with and later married my sister Jane, worked at one of the plants. I think it was called Y12. As things changed in the Atomic City, new and different items of interest became the focal point. His first job, while in school in Oak Ridge, was delivering newspapers. After completing his education, he had something to do with the development of the space program, working on tools for the exploration of space. O.T. found himself involved in the equipment that went to the moon. Throughout his life he never discussed his work.

We always loved visiting with my sister and her family. They lived on a hillside above the Clinch River. On the way there, you passed the tremendous smoke stacks and speculated as to why they were there.

There are all kinds of stories concerning those days, many originally secretive. The gates to the city were eventually removed and one can travel there without being detained.

There’s a fine museum there that tells the story so well. I hadn’t thought about Oak Ridge in years until I found this book Girls Of The Atomic City.