The Way Things Used To Be…

Regular computer buffs rarely open and read e-mail that is shown as forwarded information. How- ever, it’s worth checking when a friend specifically sends it in regular message form. Here is one that caught my eye.

Mom used to cut chicken, chop eggs, and spread mayo on the same cutting board with the same knife, with no bleach cleaning in between cutting and chopping—but we didn’t get food poisoning.

Mom used to defrost hamburger on the counter and kids sometimes ate it raw—but didn’t get E-coli.

Almost all of us would have rather gone swimming in the lake or a river instead of a pristine pool.

The term cell phone would have conjured up a phone in a jail cell, and a pager was the school PA system.

We took gym, not PE—and risked permanent injury with a pair of high top Ked’s (only worn in gym) instead of having cross-training athletic shoes with air cushion soles and built in light reflectors. Injuries must have happened because they tell us how much safer we are now. Flunking gym was not an option—PE must be much harder than gym.

Schools feel free to give us a couple of baby aspirin and cough syrup if we started getting the sniffles. Remember school nurses? They wore those little white caps.

Remember when we were supposed to accomplish something before being allowed to be proud of ourselves?

Were kids bored without computers, Play Station, Nintendo, X-box, or 270 digital cable stations? We knew how to enjoy being outside, playing hop scotch, hide and seek, or tag. Those were the days.

There was total denial of dangers of traveling down the road to some guy’s vacant lot, built forts out of branches and plywood, made trails, and fought over who got to be the Lone Ranger. The property owner let us play on that lot instead of putting up a fence around the property with a self-closing gate and an infrared intruder alarm.

We played king of the hill on piles of gravel left on vacant construction sites. When we got hurt, Mom pulled out the 48¢ bottle of Mercurochrome and then we got spanked. Now it’s a trip to the emergency room, followed by a 10-day dose of a $49 bottle of antibiotics. Mom calls the attorney to sue the contractor for leaving a vicious pile of gravel.

We didn’t act up at the neighbor’s house because, if we did, we got spanked (physical abuse)—and then got spanked again when we got home.
Kids choked down dust from gravel driveways while playing with Tonka trucks—not the rough Berber carpet in the family room—Tonka trucks were made tough.

Summers were spent behind the push lawn mower. To top it off, not a single person had ever been told that they were from a dysfunctional family. How could we possibly have known that we needed to get into group therapy and anger management classes? We were obviously so duped by so many societal ills, that we didn’t notice that the entire country wasn’t taking Prozac! How did we survive?

All these things were true, once upon a time. It was fun, the way things used to be. Now we manage differently, making sure everyone in the family has special hobbies, entertaining events to attend, and ways to keep happily busy. 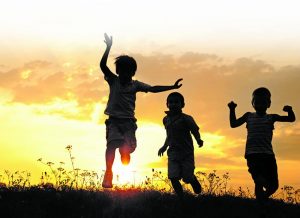