This Is Really About A Cat

My daughter texted and gave me 90 minutes notice that she was bringing her new boyfriend home for dinner.
Hair On Fire!!! Panic! 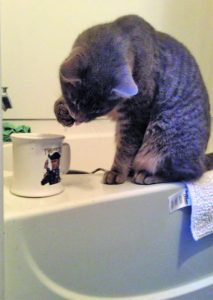 I had to shop for food, cook dinner, and tidy the house!

Within 30 minutes, I had the pork chops in the oven. I swept the hardwood floors, dusted, cleaned off the dining room table, and mopped the kitchen floor. I realized that I might actually pull it off and be ready before they arrived. All I had to do was clean the clean bathroom.
I cleaned the counter and sink and then mopped the tile floor and cleaned the mirror. Everything was sparkling clean.
Ha! Meet Slamin’ Sammy. He’s my fur baby and he threw a fur ball smack in the middle of my very tight timeline.

He came up from the dusty, unfinished basement as I was slathering brown sugar glaze on the chops. He stopped to look at me, dismissed me, and sauntered off to parts unknown.

When I turned from the oven, I saw black paw prints all across my clean, white kitchen floor! I followed the tracks across the kitchen, down the hall, and into the just-scrubbed bathroom! There he was! Perched on the edge of the tub, dipping his filthy paw into his cup of water.
Not only were his black paw prints all over the clean floors, they were on the counter, on the tub, and in the sparkling sink!

There were dirty paw prints everywhere!

When he was in the basement, he played in the sump pump water. Then he walked into the dirty coal bin. His wet paws tracked the black coal dust upstairs.

In typical feline fashion, Sammy looked at me from the edge of the tub, as if to say, “You’re disturbing me. Is there a problem?” I grabbed his paws and started wiping them off with toilet paper. He was having none of it and scurried away.

There was a knock on the door.

I ran back to the kitchen and grabbed my mop. As fast as I could, I passed it over all the paw prints from the kitchen, down the hall, and into the bathroom. I pulled out what must have been 10 antibacterial wipes and swiped them over everything.
Another knock at the door.

More Panic!
I threw the mop into the bedroom closest and slammed the door closed.
At this point my daughter started yelling, “Mom! What are you doing?”

“Coming,” I replied, as if nothing was amiss in the house.
Dinner was delicious and went off without a hitch. After clearing the table, my daughter went into the bathroom, while I continued interrogating—er… talking with her boyfriend.

“Mom,” her voice came from behind the bathroom door, “what happened in here?”
Slammin’ Sammy and his dirty paws went back into the bathroom while we were having dinner and played in the water, again! His paw prints were all over the bathroom. This time, instead of running for the mop and wipes, I just closed the shower curtain.

By the way, I have to keep his cup of water right there on the edge of the tub, it’s the only way I can get him to drink water. He won’t drink it from anything other than his cup.

Yep, spoiled doesn’t really begin to describe him. Wait until I tell you about his catio fiasco!