Those Were The Good Old Days…

Once in a while, a child decides to ask how it was in the “good old days.” The parent has to sit a spell and try to recall something worth talking about. It could be about finding the chalk, drawing the game plan on someone’s sidewalk, and having the neighbor kids come over for a game of hop scotch. Or perhaps playing softball in the street or setting up the croquet set in a back yard after you mow the lawn for Mom and Dad.
My friend Helen had some good answers to these questions: Mothers used the same cutting board and knife for cutting eggs, chopping chicken, or spreading mayonnaise… without cleaning them… and no one got food poisoning. The hamburger was thawed setting out on the counter. The kids sometimes ate it raw but never got E-coli. 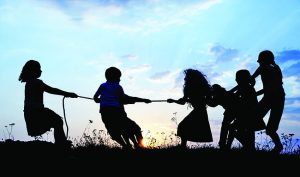 Ah, yes, there was Dad, the piano man who bought old pianos, cut the top down (where no keys existed), put a mirror on the cut down area, refinished the framework to look like new and came up with a ‘spinet’ type instrument. Then he would decorate the interior of an enclosed moving van type truck, take three pianos over to West Virginia and sell them in a day’s time. At least, he kept the old player piano at the house for kids to pump out the old songs. A lot of good singers learned from coming to the house to singing along with the old piano rolls.
Swimming in the lake or river was far more fun than going to a well-planned swimming pool.
At school we said prayers and sang the national anthem. Sometimes we were kept in detention after school. We were probably permanently damaged and don’t know it.
When in school, if someone went running in the halls in leather sole shoes on linoleum tiles, and slipped on a wet spot, no one sued the school system.
If you weren’t feeling well, it was possible to get a couple of aspirin or cough syrup, if you developed the sniffles.
The term ‘cell phone’ was unheard of. Messages were sent by the school’s PA system.
For special recognition, we weren’t just next in line… we had to accomplish something really important in order to be proud of ourselves.
In the good old days, were kids bored without computer Play Stations, Nintendo, X Box, or 270 digital cable stations? No way, they knew how to enjoy being outside playing tag or hide and seek. Those were the days.
No one spoke of dangers that could have befallen by trekking down the road to some guy’s vacant lot to build forts out of branches and plywood, making trails, or fighting over who got to be the Lone Ranger. The property owner let us play on the lot instead of putting up a fence around the property with a self-closing gate and infrared intruder alarm.
We played King Of The Hill on piles of gravel left on vacant construction sites. When we got hurt, Mom would pull out the bottle of mercurochrome, fix it, then spank us. Now, if that happens it means a trip to the emergency room, followed by a 10-day dose of antibiotics. Mom calls the attorney to sue the contractor for leaving a vicious pile of gravel.
We didn’t act up at the neighbor’s house because if we did, we got spanked (physical abuse)—and then got spanked again when we got home.
Mom always invited the door-to-door salesmen into the house for a cup of coffee. Imagine that being done now.
Kids choked on dust from graveled driveways while playing with those tough Tonka trucks. They weren’t played with on the Berber carpet in the family room.
Summers were spent behind the push lawn-mowers. (That’s during the years the kids mowed the lawns). We didn’t know mowers came with motors until we got one without an automatic blade-stop or auto-drive.
Did the boy next door ever come over and do his tricks on the front stoop before he fell off? His Mom would pick him up, dust him off, and swat him for being so goofy.
In those days, not a single person had ever been told they came from a dysfunctional family. In those days, how could we have possibly known we needed to get into group therapy and anger management classes? We didn’t even notice if the entire country was taking Prozac! How did we survive?
All these things… and more were once upon a time. It was fun the way things used to be. Now we manage differently, making sure everyone in the family has special hobbies, entertaining events to attend, and ways to keep happily busy.

Where did the time go?

Kitty Maiden is a staff writer