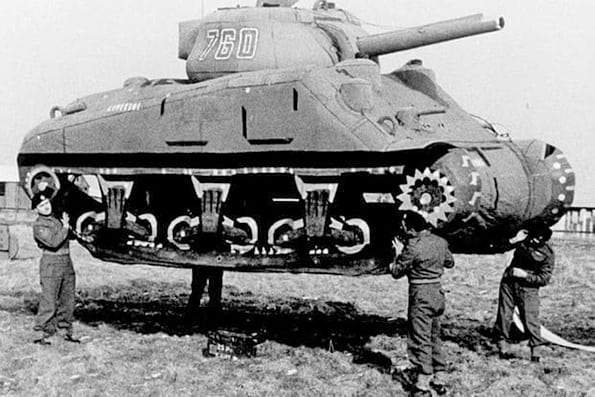 by Freddy Groves
It takes a certain kind of soldier to create diversions on the spot, pretend to be a much larger unit than they are, and believably im-personate others, but that’s exactly what the top-secret Ghost Army did in World War II. Over 1,000 men, with their act-ions, saved the lives of an estimated 30,000 soldiers during the war.

Their deceptions were stuff of legend, with 1,000 men pretending to be over 20,000. The 23rd Headquarters Special Troops and the 3133rd Signal Service Company created make-believe headquarters, whole divisions, and fake convoys, all with the purpose of deceiving the enemy about the size and location of Army units. Using recordings, they created the impression of large armored units and faked radio traffic, even copying the Morse code style of others. They used inflatable airplanes, rubber tanks, troops, and jeeps that they’d pump up with air compressors, laid down fake tank tracks in the dirt, and told tall tales in local cafes to spread false information to the enemy. They could turn on a dime, suddenly appearing miles closer than the enemy believed they were.

Now, years after the fact, they are finally being acknowledged and recognized. In February, the Congressional Gold Medal Act was signed, awarding the medal to both groups, after they were declassified in 1996.

To read more about the Ghost Army, go to the Ghost Army Legacy Project (www.ghostarmylegacyproject.org). Be sure to see the archives for journals kept by the soldiers from those units, as well as the Secrecy And Leaks file. See ghostarmy.com for even more in-formation. (Don’t miss the pictures of all their gadgets and equipment.)

Look for The Ghost Army documentary on PBS stations and on Netflix. It was first shown in 2013. Additionally, look for the future film that’s to be directed by Ben Affleck.

At this writing, there are only nine surviving Ghost Army veterans, all of them nearly 100 years old.