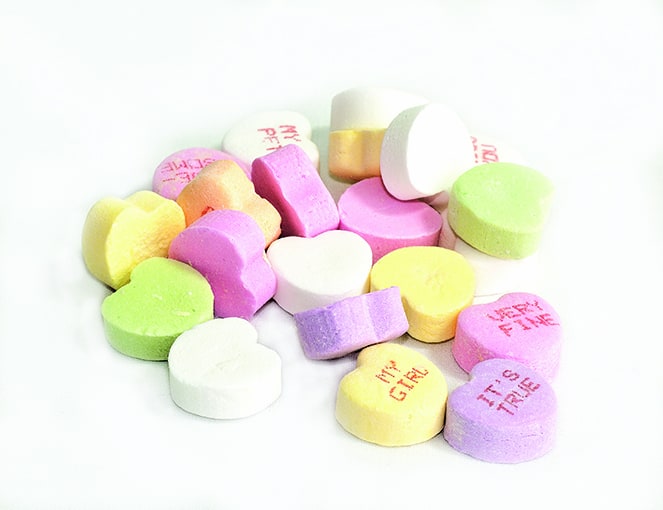 Special to Seniors Today
Conversation hearts are known for being part of the many Valentine’s Day celebrations. They use different names to discribe the cute little candies such as Necco hearts, candy hearts, and sweethearts.

Everyone enjoys reading the messages, but not many really want to eat the candy. Some compare it to the candy corn debate of the Halloween holiday or the marshmallow Peeps of Easter. The candy is part of the holiday and would not be the same without them, but a lot of people enjoy them with their eyes and not their taste buds.

The little candies that say a lot got their start in 1847. Oliver Chase, a Boston pharmacist, came up with a machine that would make lozenges.

These lozenges were very popular at the time for sore throats and bad breath, though making them was a labor-intensive process that involved pulverization with a mortar and pestle, kneading dough, rolling it out, and cutting it into small discs.
Chase’s machine became America’s first candy-making machine as he shifted his focus from medicinal lozenges to straight candy. He founded the Chase and Company which later became the New England Confectionery Company, or Necco. These candy lozenges became todays Necco wafers.
Then in 1866 Oliver’s brother, Danial Chase found a way to press words into the candies, using a felt roller and vegetable coloring.

Conversation candies did not change from their orignal discs shape until 1902 when they went from being motto lozenges to hearts. They also appeared in fun shapes like baseball, horseshoes, and watches.

The heart shapes became a big hit. Over the next century other companies started producing similar products.
Necco estimates that it makes nearly 100,000 pounds of the hearts each day throughout the year in preparation for Valentine’s Day.